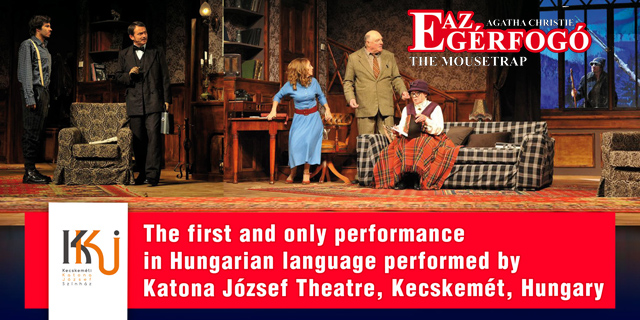 The József Katona Theatre of Kecskemét is delighted to be the first Hungarian theatre to stage a guest performance in London’s West End, on the 28th of April. The company has presented many acclaimed performances over the years – which tradition has continued over the last 5 years under the management of actor Péter Cseke. The theatre aims to provide constant challenges for the company, providing them with demanding roles and great acting possibilities.

This production of the “Mousetrap” is special for us in that all generations of the company are involved, allowing our young actors to work with and imbibe the techniques of the older “legends”; including prize-winning company life members Erika Réti and Jeno Kiss, who together bring a 100 years of stage experience to the production. Alongside them are Zita Téby and János Szemenyei, who are making their company debuts in this production, and the youngest member of the company, Balázs Csémy, who completed his internship in the theatre, in the process becoming an audience favourite. Husband and wife Zoltán Hegedus and Judit Danyi have been members of the theatre cast for 15 years but in this performance Judit’s stage husband is played by Bálint Ferencz. Your task is to find out who the murderer is!

Tickets are on sale at the box office of St Martin’s Theatre, London or online.